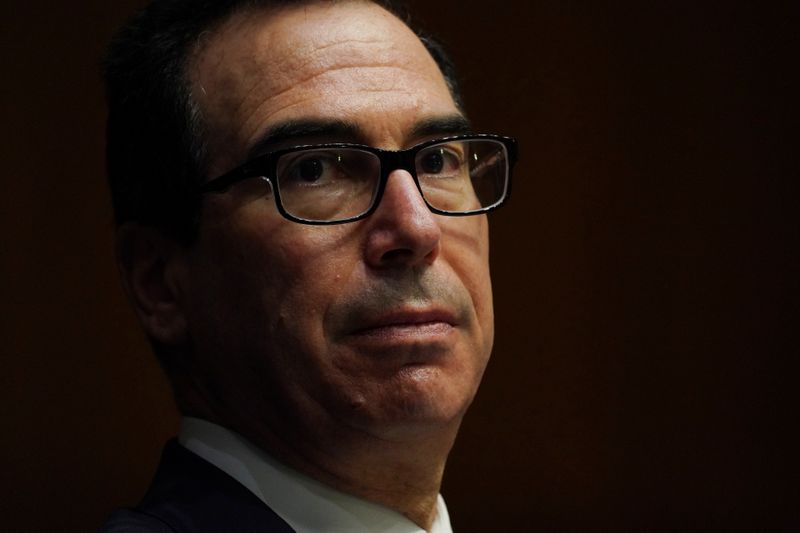 By Howard Schneider and Ann Saphir

(Reuters) – U.S. Treasury Secretary Steven Mnuchin said on Thursday that key pandemic lending programs at the Federal Reserve would expire on Dec. 31, putting the outgoing Trump administration at odds with the central bank and potentially adding stress to the economy as President-elect Joe Biden organizes his administration.

In a letter to Fed Chair Jerome Powell, Mnuchin said the $455 billion allocated to Treasury under the CARES Act last spring, much of it set aside to support Fed lending to businesses, nonprofits and local governments, should be instead available for Congress to reallocate.

The decision comes as data shows the early fast recovery from a historic plunge in the economy is fading, with more than 10 million who had jobs in January still out of work

“I am requesting that the Federal Reserve return the unused funds to the Treasury,” Mnuchin said in a letter to Powell, declining to extend programs the central bank has said were critical to assuring credit flowed to all parts of the economy during the worst economic downturn in a century.

The announcement was not expected by Fed officials, who had said this week that the programs should be extended, and told Mnuchin so immediately after his decision was made public.

In an emailed statement, the Fed said it “would prefer that the full suite of emergency facilities established during the coronavirus pandemic continue to serve their important role as a backstop for our still-strained and vulnerable economy.”

“I think given where the economy is, and there is so much uncertainty still out there, it is prudent to keep those things open,” Atlanta Fed President Raphael Bostic said in an interview on Bloomberg Television. Bostic is on the shortlist to be Biden’s Treasury secretary.

The announcement could signal potential trouble for the incoming Biden administration. Although the programs were not used extensively, Fed officials felt their presence reassured financial markets and investors that credit would remain available to help businesses, local agencies and even nonprofits through the pandemic downturn.

“For about three weeks in January, the markets will be operating without the backstop they’ve had since the spring,” said JPMorgan (NYSE:) analyst Michael Feroli, referring to the time between the expiry of the Fed programs and the inauguration of Biden, a Democrat, whose Treasury secretary could reopen the programs.

Mnuchin did allow a 90-day extension to a group of other programs that supply cash to core financial markets, including those for short-term corporate credit.

But Fed officials have emphasized in recent days that the broad economy is not yet out of the woods, with the pandemic spreading, millions unemployed and important business sectors suffering Depression-level downturns.

In his letter to Powell, Mnuchin said that in the “unlikely event” the lending programs were again needed, the Fed could request the Treasury to re-establish them with funding from the Treasury’s own stability fund or with new money from Congress.

The programs, particularly the “Main Street” and local government landing programs, raised the prospect of trillions of dollars in central bank credit flooding into an economy that had been partially shut down in the spring because of the pandemic.

As of Thursday, the Fed had made just $5.4 billion in Main Street loans, according to data released on Thursday. The Municipal Liquidity Facility had only issued about $1.7 billion in loans.

But the programs were considered an important element of the pandemic response, broadened at the behest of lawmakers who wanted the central bank’s lender-of-last-resort powers, usually limited to financial institutions, opened to the entire economy because of the pandemic’s dramatic impact on commerce.

Democratic U.S. Representative James Clyburn, chairman of the House Select Committee on the Coronavirus Crisis, said there was “absolutely no justification” for Mnuchin to shelve the Fed’s lending programs in the midst of the health crisis, and asked him to reverse the decision.

Some Republicans in Congress feel it is time, however, for the Fed to retrench, even with coronavirus infections at record levels and deployment of a vaccine likely months off.

Pat Toomey, a Republican senator poised to lead the Banking Committee if Republicans hold the Senate, applauded the Treasury’s actions.

“These facilities … have successfully achieved their intended purpose,” he said. “With liquidity restored, they should expire, as Congress intended and the law requires, by December 31, 2020.”

Others were not convinced.

“The Fed has been one of the only sources of stability in Washington and removing its latitude to offer support in a shaky recovery is simply nonsensical,” said Isaac Boltansky, director of policy research at Washington-based Compass Point Research & Trading.

“This is a distressing development that injects uncertainty and instability into markets completely unnecessarily. How many times will Washington trip on its shoelaces in response to this crisis?”

Redfin Appoints Kerry D. Chandler to Board of Directors

Mario Cuomo, Lauded Speech-Giver, and Governor in His Spare Time